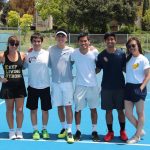 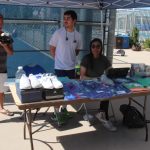 We are happy to announce Courts for Life raised $1,675 for the KLS Foundation Research Fund! The tournament was a blast! They had 44 total teams participating in the tournament. There were 24 men’s doubles teams, 6 women’s teams, and 14 mixed doubles team participants. They had tents set up with raffle prizes, free ice coffee drinks for players and spectators, free Chick-fil-A sandwiches for players, tents set up to shade the volunteers and spectators from the Southern California sun, and trophies and medals for the winners of the tournament! The Courts For Life team worked very hard to put on this event! They reached out to sponsors and some of the sponsors that contributed to make the tournament successful were: Madeline Segura, whom provided Courts for Life with 2 cases of Penn tennis balls, Dunlop which offered a brand new tennis racket, Chick-fil-A provided 60 sandwiches, Chipotle contributed two Dinner entrée vouchers valued at $50, Coffee Bean gave a gift basket, Furi provided strings and grips, Ugly Coffee donated free iced coffee drinks, and my family (the Wong’s) provided 20 BNP Indian Wells Tennis Gardens Fila Tennis shirts, eight visors, and two pairs of tennis shoes for the raffle. I can’t thank Courts for Life enough for hosting this tournament and selecting the KLS Foundation as the beneficiary! It means the world to me as I have lived with KLS for the past 15 years and continually hope and pray for a cause and cure to be found. Every problem has a solution and with time, awareness, and funds for research, we will find ours. It’s people like the Courts For Life team that makes it possible. Every donation helps get the KLS Foundation one step closer to finding the cause and cure of KLS. Thank you to Francesco Nguyen for founding Courts For Life, Brandon Tang for working tirelessly on the event, and to the whole team for making this tournament a reality. We also give a big thank you to all the participants who played for the KLS cause. I thank you as do all the KLS Foundation Board Members.