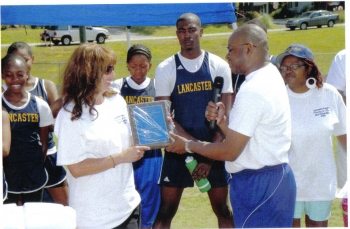 With her blue Run for Ryan hat pulled down low, shielding her from the near 90 degree heat, Donna White spent much of Saturday raising money in honor of her late son.

Hundreds of supporters joined her, turning out for the third annual Run for Ryan event at the Lancaster High School track field.
The event featured a track meet between Lancaster, Buford and Indian Land high schools

There was also plenty of barbecue, face painting and inflatable rides for children.

But the main focus was on raising awareness of Kleine-Levin Syndrome (KLS), a rare neurological disorder that may result in altered behavior and a need for excessive sleep.

White’s son, Ryan McKinney had KLS.  He ran track briefly in the 10th grade, and graduated from Lancaster High in 2004.
Sadly Ryan died at the age of 19 in 2006.  Since his death, White has advocated for further research of the disorder and organized the event in his memory.

“The weather was perfect attracting many to the event.  “It’s absolutely wonderful. We couldn’t ask God for any more” White said.
The turnout for this year’s event far exceeded the previous year’s attendance, and with just the sale of $7 barbecue plates, over $3000. was raised. White’s hope is that the event continues to grow every year.

Besides the track meet, there was also a KLS information booth where people could pick up brochures and pamphlets about KLS. As a member of the national KLS Foundation, White hopes to educate people about KLS.  There’s currently no known cause or cure for KLS, but early detection can help reduce the fear and anxiety that accompany this rare disorder.  Donna White was excited to have several supporters there with her, including parents of children with KLS. “It’s nice to have two other parents to share this with,” White said. “To validate what I’ve been saying all this time.”  Two of those other parents were Lori Haller and Cindy Maier, members of the national KLS Foundation who have sons with the disorder.

Both from California, Haller and Maier flew in to South Carolina to support White at the event. They were also on hand to share their personal experiences with KLS.

Maier, whose son Stephen is now 35 and had his last episode in 2001, said there was no “rhyme or reason” to the disorder. “My son slept two weeks straight every nine months,” She put her son’s diary on the Internet for other families to read, so they knew they weren’t alone.  Haller’s son, Eric, who is 18, just came out of an episode. She said when he’s not having an episode, he’s “otherwise a normal healthy teenager.”  “The foundation is a godsend for families,” Haller said. “This is a cruel disease because it robs kids of whole chunks of their lives.”

Donna White’s brother, the Rev. Floyd White, said the event was a great way to keep Ryan’s memory alive. “This is a total collaboration of the entire community,” he said. Church, school and civic organizations within the community all made this event possible.  “You’ve got generations here, at least two or three.”  Dr. Wayne Gilliam, a Lancaster dentist who helped with the event, was also pleased with the response from the community.  “It’s a good idea. Any way to involve young people, to get them interested, is a success,” Gilliam said.  He hopes more school teams will participate in years to come. As she watched the student athletes racing around the track, and the crowd cheering them on, Donna White grinned with excitement.

“We’re pleased and finally I think my boy’s smiling down and saying, ‘Go ahead, Momma, I’m OK,’” White said.