“I’VE BEEN IN A KLS EPISODE FOR THREE YEARS NOW” 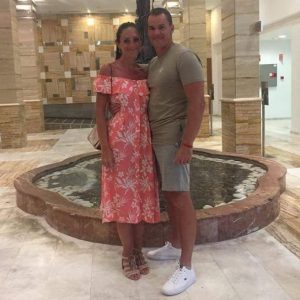 “I’VE BEEN IN A KLS EPISODE FOR THREE YEARS NOW”

Thirty-one-year-old Simon Storey from Middlesbrough, England, is trying to get through an episode that began when he was 28. He talks about what his life’s been like all this while, and how his partner, family and KLS friends are helping him get through the ordeal.

My KLS symptoms began in May 2006, when I was 26 years old. I was a university student at the time. I woke up one morning after a night out with friends, feeling quite odd, like nothing around me was real. I’d been suffering from migraine attacks since the age of 12, so I figured I was just having a bad migraine. But by the afternoon, I felt a lot worse. I had trouble reading and writing in class, and when I returned to my apartment, I struggled to unlock the door. Worried, I rang my parents and told them how I was feeling.

The next day, I went to my parents’ house. I still felt like I was semi-awake. My parents asked if someone had spiked my drink the other night, or if I was stressed out at school, because my symptoms made no sense.

What’s wrong with me?

By the third day, I still couldn’t tell what was real and what wasn’t. I told my parents that I was feeling confused and “out of it”. I was really scared at this point. My concerned dad brought me to the doctor, who checked me into an assessment ward at our local hospital. For two days I had to endure various blood tests and a brain scan, all of which proved inconclusive. Seeing that my tests were okay, the doctor discharged me from hospital. He suspected my problem might be psychological and recommended I see a psychiatrist, but my dad told him in no uncertain terms that I had no mental health issues.

I stayed on at my parents’ house because I didn’t feel comfortable going back to my apartment alone, and for the next couple of days, I slept pretty much all day and night. My mother had to wake me to eat. Later, she told me that when I did wake up to eat, I appeared to be in a trance.

Feeling better… But not for long

Two weeks later, my symptoms disappeared and I returned to my apartment. I felt much better, like my old self again. I had no explanation for my symptoms, and when I look back on it now, it still seems like a really bad dream.

Over the next couple of years, until I was diagnosed in November 2008, my symptoms appeared about twice a year. They were always the same. Later, I noticed that my KLS episodes usually began the day after I consumed alcohol, although I don’t know if that’s just a coincidence or if the two are linked.

My worst episodes are always dark and nightmarish. It’s like something else is controlling me. I generally feel upset, angry and frustrated. I can’t seem to hear or see properly, I speak incoherently – like I’ve had a stroke – and I feel cold all the time. When speaking to people, I have to guess what they’re saying to me because I have trouble understanding them. This makes communicating with me very difficult.

How KLS has set me back

I’m still waiting to get out of the episode that began in September 2008. It’s been three years now. Overall, this episode has been mild, but I notice that when I catch a cold, my symptoms become exaggerated.

The chronic nature of KLS, and not knowing when the next episode will strike, has certainly been hard on me. I had to give up my nursing studies, which was devastating as I was already more than halfway through getting my qualifications. I’d also already secured a job for when I graduated.

KLS is a time stealer. Worse, it makes me feel like I am only half a person. I used to be outgoing and happy-go-lucky, but now I rarely socialize and find it hard to be in crowded places. I’ve lost contact with so many friends.

It’s also taken away my independence. I used to do a lot of things on my own, but now I need help from my family and my partner, Lyndsey.

I’m lucky to have such an understanding and helpful family. Lyndsey makes sure I keep my medical appointments and gives me a lot of support on a daily basis. We have a young son together, and if I’m not well enough to look after him when Lyndsey goes to work, my parents help take care of him.

The online KLS support groups are excellent. They’re a great way to share your experiences and meet others who’re going through the same thing. Alanna Wong, in particular, has been a real source of support and inspiration for me. KLS is already a very isolating illness, but without people like her, it would be even worse. KLS sufferers need to stick together and try to beat this thing as a community.

My hope for the future

When I am KLS-free, I want to return to work, regain my lost friends, and make up for the quality time I have lost with my family. More importantly, I just want to feel like my old self again and get my independence back. I miss doing all the things I used to do, like sports.

With time and perhaps more funding, I hope the medical community finds a cure for KLS. I also hope more is done to educate doctors about this disorder. Before my diagnosis, I came across countless doctors who had no clue about KLS and its symptoms. They have many years of experience between them, and I just think it’s unacceptable that they don’t know KLS when they see it. Unless something is done about educating the medical community, a lot more people are going to suffer.

Important Note: This article was written a few years ago. We hope Simon is out of his Three year long KLS episode and is healthy!