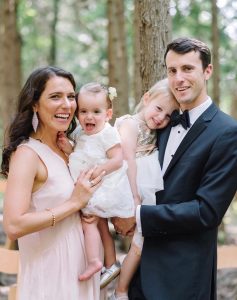 I am 33, I live in Toronto, I have been married for five years and I have two beautiful daughters, ages

4 and 1.5, a fulfilling career and wonderful friendships.

My last episode was in January 2015. I have reached the point in my life that I no longer think about KLS every day.

A week often goes by before I remember to be grateful for my ability to sleep normally, eat normally, and lead a productive, happy and successful adult life. I think in amazement that the “new” friends I have made throughout the last 6.5 years know nothing about this chapter of my life; they have no idea what plagued me for a decade.

But I never thought I would get to this place.

I had my first episode at age 17 in Mexico. I thought I had been drugged. My dad carried me home through the airport, a couple weeks went by that I can barely remember, and we moved on with our life and chalked it up to some strange Mexican bug.

Then it happened again a few months later. I was “treated” by a doctor who prescribed me Red Bull. After my third episode, I was wrongly diagnosed with epilepsy and seizures.

I was also incorrectly diagnosed with bipolar disorder, thyroid disease, and alcoholism. I was told my episodes were brought on by “menstrual-related causes.” I was treated with Amantadine, Provigil, Adderall, Cytomel, Ritalin, Wellbutrin, a cream I put on my inner wrists – you name it. I visited too many emergency rooms and saw too many specialists to count. I had every blood test, MRI, urine test, X-ray, and scan. I lost hope and faith in the medical community at large.

I first heard about Kleine-Levin Syndrome during my freshman year of college in 2007. My mom was at her wit’s end. She called a foremost pediatric neurologist who she grew up with in Canada. She hadn’t spoken to him in many years, but she was desperate for help. She described what was going on with me and he replied “you know, it sounds like this thing called KLS, but it is so rare, so I doubt it. I have never seen it in my whole career, and it affects boys 4 times more than girls, so I would be surprised if that was it…” All we had to do was a quick Google search and we could audibly exhale. This had to be it!

We then reached out to the center at Stanford and had a phone call with Dr. Mignot. Eventually he was able to give me a clinical diagnosis. I felt relieved – this beast had a name!

My family started calling my KLS personality alter-ego “Kelsey,” for KLS-y. Because anyone who knows about this disease knows Lindsay was not present during episodes. My body and brain were replaced by Kelsey, who was sweaty, demanding, and scary.

In my college years, my episodes got longer and “deeper.” I had a registered disability with the University of Michigan and a 911 action plan with my friends. And I felt alienated. I used to look at the 120,000 people in the Michigan Stadium on Football Saturdays and think “you don’t know what KLS is.” It got lonely. I managed to graduate on time with a major in Art History and minor in Spanish.

Post-graduation was a little trickier. Dating and job searching were hard. I never felt great about texting “See ya in a while!” after a third date and I didn’t know how I could hold down a job. I felt stuck. It wasn’t easy, but I shifted my attitude and my focus. I practiced gratitude for each minute, day and hour of good health and held on to fulfilling memories, relying on these to get me through. I also leaned on family and friends and took comfort in knowing those who had outgrown KLS. I tried to take things one day at a time, because baby steps felt much more achievable than long-term marriage and career plans when I couldn’t plan from one day to the next.

I felt terrified when my now-husband and I were first dating. I didn’t know how to tell him, and I feared I would scare him away. Finally, I gathered the courage, telling him I needed to talk to him about my “weird brain thing” and showing him all the videos. His support was unflinching, and I knew we would figure it out together. It turns out I never had another full-fledged episode, so he never got to experience it and will probably never completely understand.

There was an intense emotional toll this disease took on me; I had extreme bouts of anxiety and depression. I remember thoughts of “Thank Heavens I don’t have cancer, this is no big deal.” But also: “At least cancer is well-researched! At least people have heard of it!”

In the later years, I had what my family called quasi-episodes, marked by lethargy, “off”” feeling, increased appetite, intense fatigue and need for sleep; but without the confused part, without the derealization and the cognitive and behavioral differences. I could function and think, I could take care of myself, but each day was a struggle. I could go to work and “fake it,” but that required a ton of effort, and it wore me down.

I also had self-induced guilt from having to rely on my parents so much to take care of me. I had a fierce desire to be independent and not need them the way I did.

In 2014, when I was 26, I wrote about my experience with KLS. These words are still hard to read.

“A KLS ‘episode’ is a period in which I completely disengage from this earth. When an episode is first coming on, I have about 12 hours until I am … imprisoned by KLS. The onset on an episode feels like slipping. I am slipping deeper and deeper into a confused, disoriented state. I am not 26-year-old Lindsay. I am not really Lindsay at all.”

Today, I have a sense of pride for my body and its ability to heal and a greater sense of gratitude and appreciation for my days and weeks and years ahead.

I am deeply grateful for the community I’ve met through the KLS Foundation. We all have each other’s backs. We have all raised awareness and rallied our communities. We are implementing change.

I cried the entire way through the first KLS Conference back in 2011. I could not believe I was standing in a room full of people who understood. After the conference, I talked many times with KLS Foundation board members who listened to me, and really heard me. They were a source of comfort during this terrible decade of my life.

I look forward to meeting more of you. When we talk, I hope that you will know that you will reach a day when this is in the past and you will live your life to the fullest. But to those of you who are in the thick of it: We all believe you. And we’re here for you.